Even though we're still early in the season here in Central Vermont, volunteers have contributed 89 surveys, and have collectively put in over 85 hours of time in the field documenting 1801 amphibians at 34 different road crossing sites. Thanks to all who are helping out with this project, and congratulations to those who reported seeing their first Four-toed, Jefferson, and Blue-spotted Salamanders!

After a couple cold weeks in late-March and early-April, the conditions have now warmed up to the point that amphibians are on the move between overwintering forests and their breeding ponds. A daytime visit to a vernal pool this week will reveal a raucous chorus of croaking wood frogs. Underwater, you'll find new egg masses of Jefferson and Spotted Salamanders, and much more expansive collections of wood frog egg masses nearby.

Our "mole" Salamanders (Spotted, Blue-spotted, and Jefferson) reproduce in vernal pools through an elaborate act of gift giving and dancing. Male salamanders create a white, pedestal-looking spermatophore on top of the submerged leaf litter, then encourage females over to the deposit with a wriggling, underwater dance. The females collect the spermatophore from the bottom of the pond, then travel to a submerged twig or sedge leaf to lay several dozen fertilized eggs in clusters.

Once the mating activity settles down, the salamanders leave the water and return to their terrestrial haunts, often re-crossing the same roads they braved earlier in the spring.

Last night, one volunteer reported a Spotted Salamander headed the "other way," suggesting that the earliest of our vernal pool visitors have finished their business, and are on their way back to the woods. The major water-ward movements in the Champlain and Connecticut River Valley may be winding down, but most places in Central Vermont are just getting started. We still have a few good nights of concentrated movement ahead.

Check out the below video and photos of some of the season highlights from our NBNC naturalists. 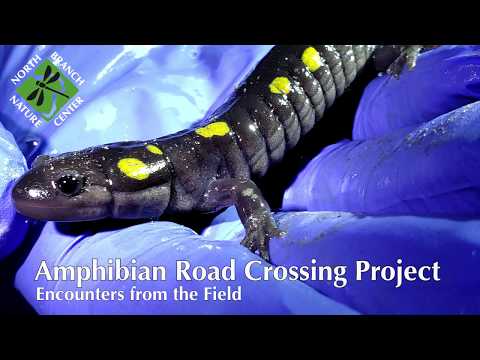